Achyutaraya’s Temple, also known as Tiruvengalanatha Temple, is a 16th c AD (1534) construction that now lies in ruins. It is one of the large temple complexes in the Sacred Center, and very much follows the tradition of Tamil temple architecture. The temple is set within two concentric enclosures with large gopurams on the north side. These gopurams lead to a wide and long colonnaded street that leads northwards towards the river. The main temple also faces north.

Exploring this ruined and relatively isolated temple and its surroundings, as well as some other such areas in Vijaynagar, reminded me of exploring the smaller temples at Angkor Thom, the city next to Angkor Wat in Cambodia. As we walk amongst and through these ruins, we are treated to an almost endless series of views of different stone monuments from various changing angles and perspectives, moving from one monument to another, often moving within a monument enclosure to find another enclosure with another set of monuments within it. The boulder-strewn landscape of Vijaynagar adds another element to all this, with the stone monuments made of the same material as the boulders around them.

Another aspect of Vijaynagar’s ruins is the aesthetic contrast between the granite stone lower structures and the brick towers, shikhars, gopurams and ornate parapets (sometimes covered with stucco sculpture work) above them. This is a contrast between longer-lasting and more perishable materials, between heaviness and (comparative) lightness, lighter coloured base and darker top. Of course the finished product would have been plastered and painted in various ways, but the presently contrasted materials add to the appeal of the ruins.

Colonnaded bazaar street in front of the temple, leading to the river

Irrigated valley behind (to the south of) Achyutaraya’s Temple

Matanga Hill looming in the background 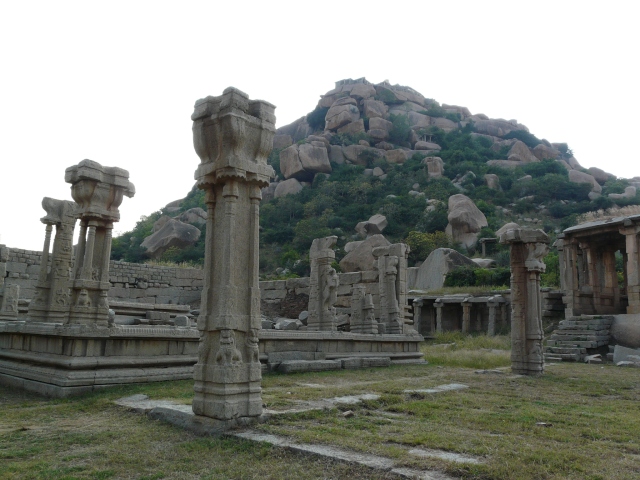 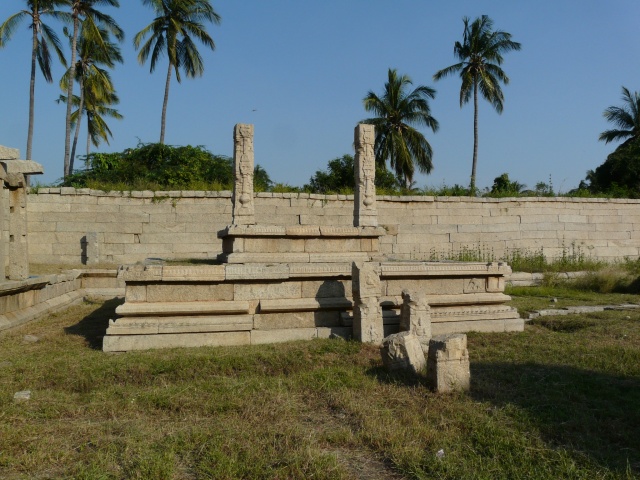 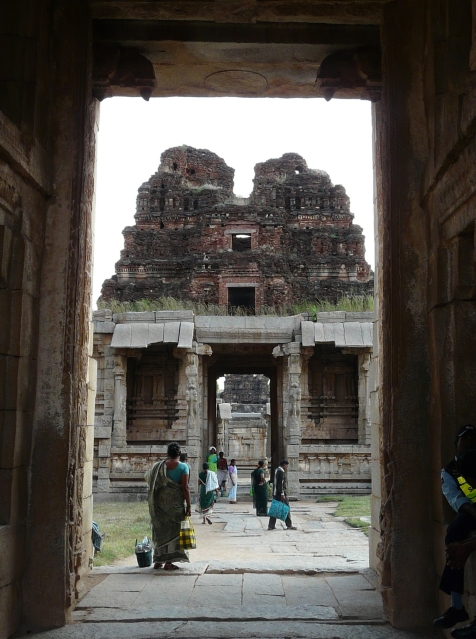 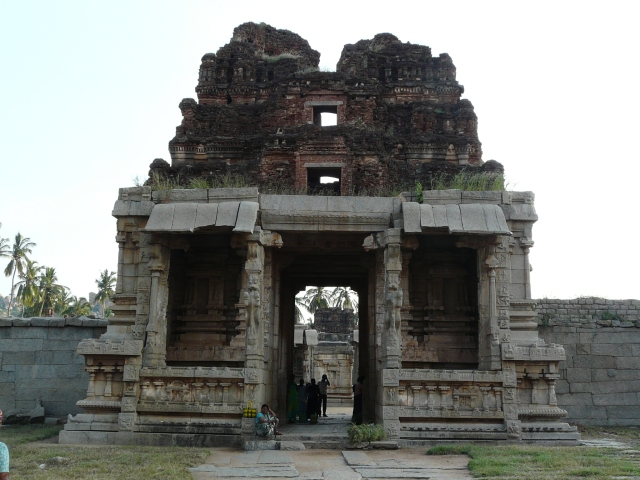 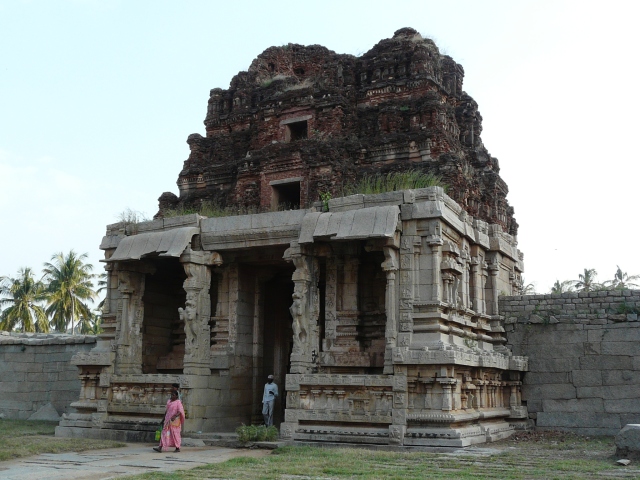 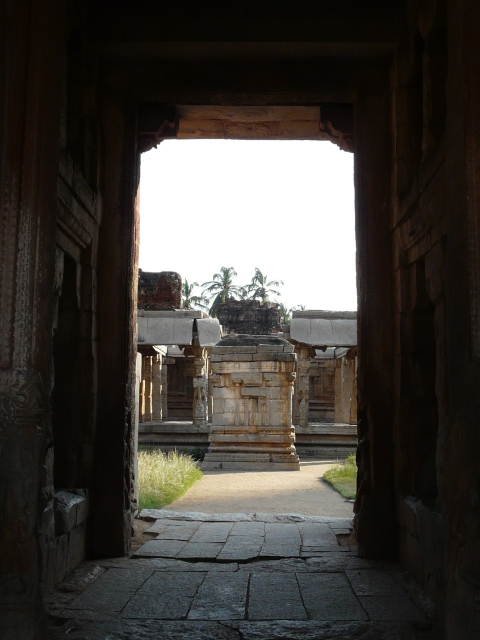 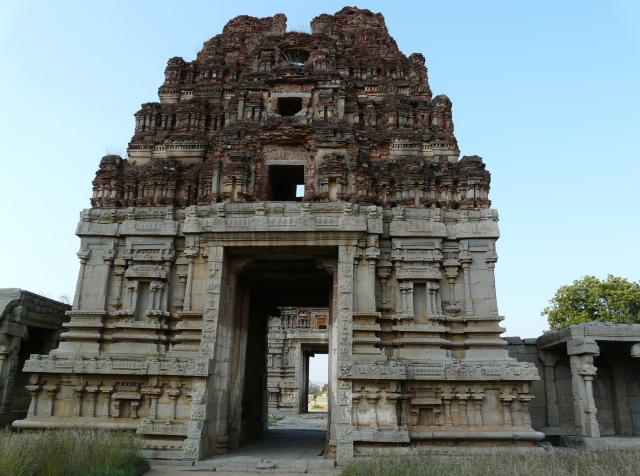 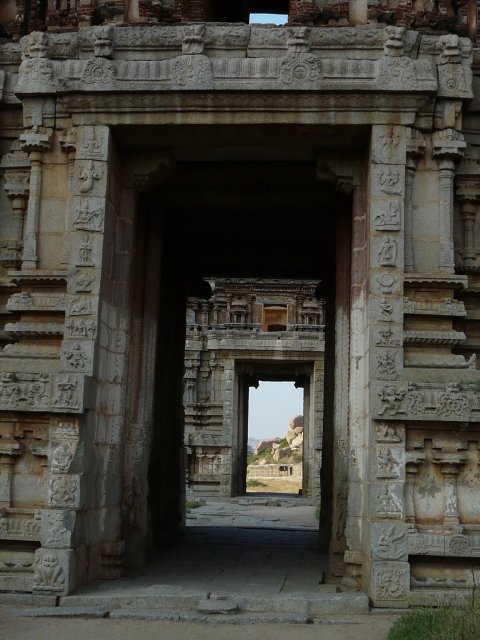 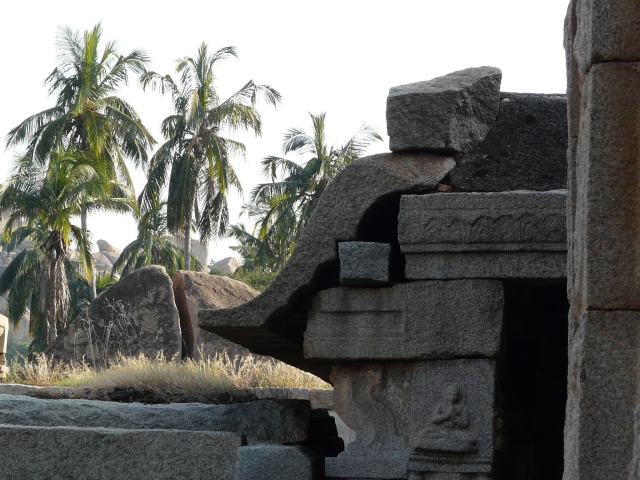 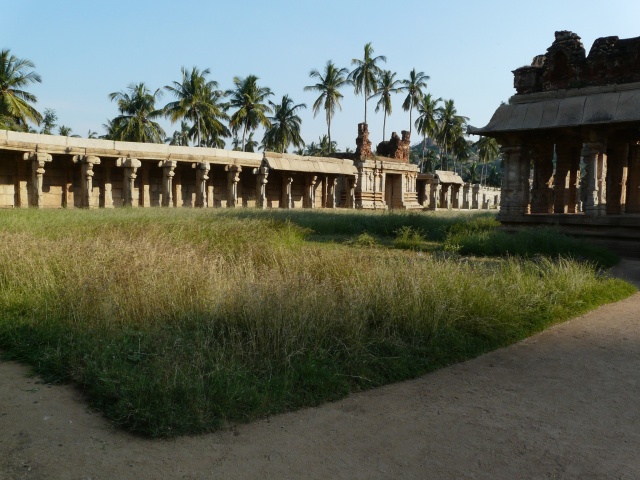 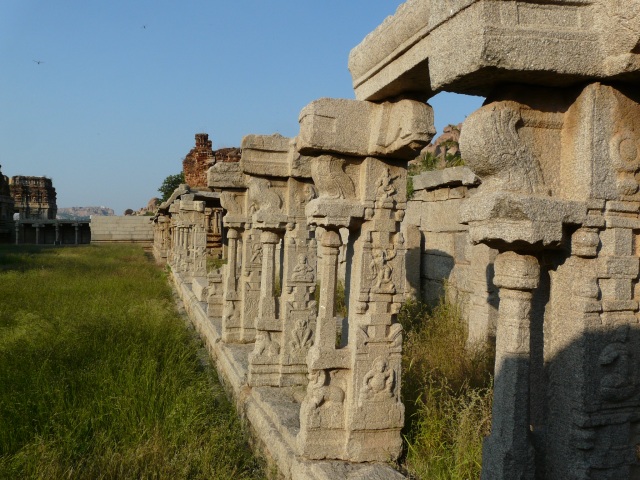 Mahamandap (with fallen roof) and gopuram 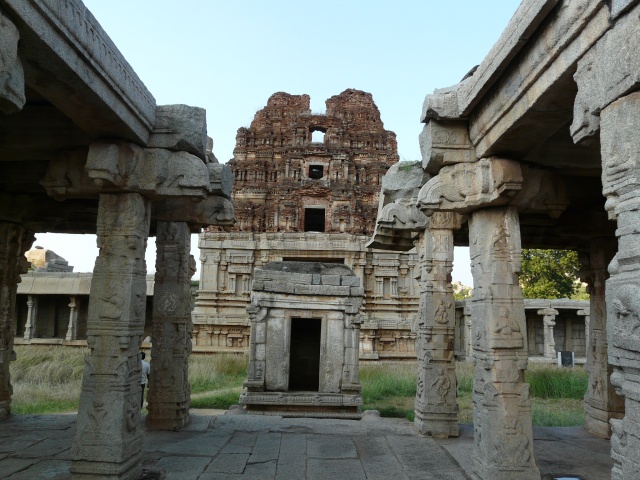 Looking towards the sanctum area, doorway flanked by dwarpalaks 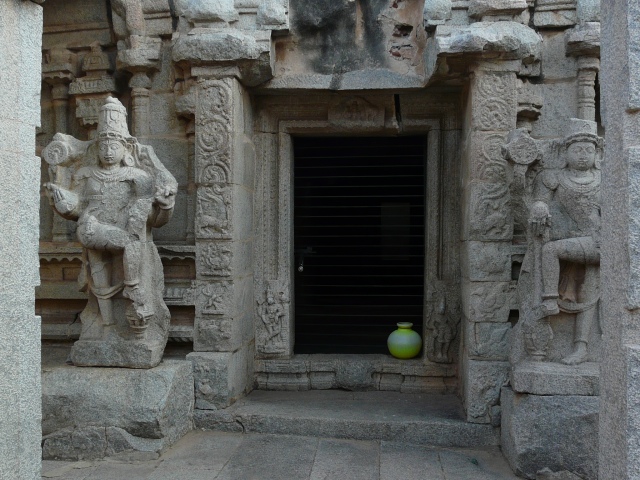 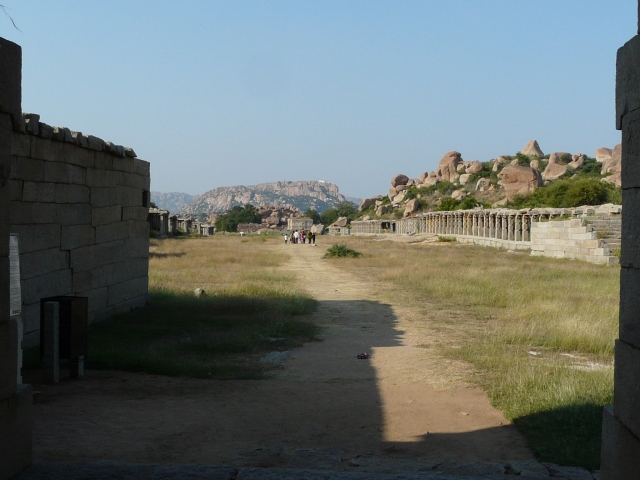 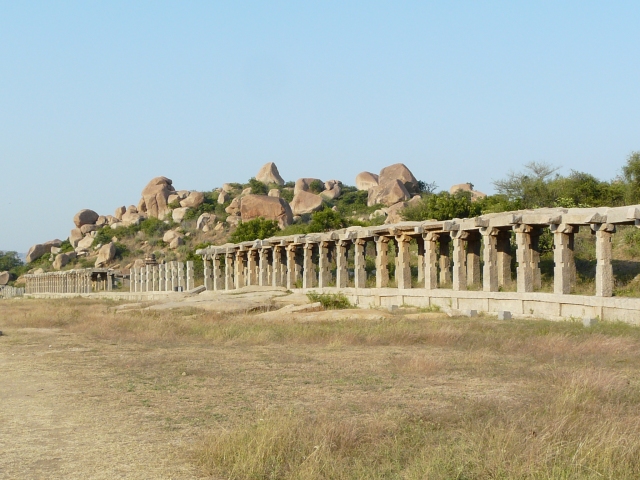 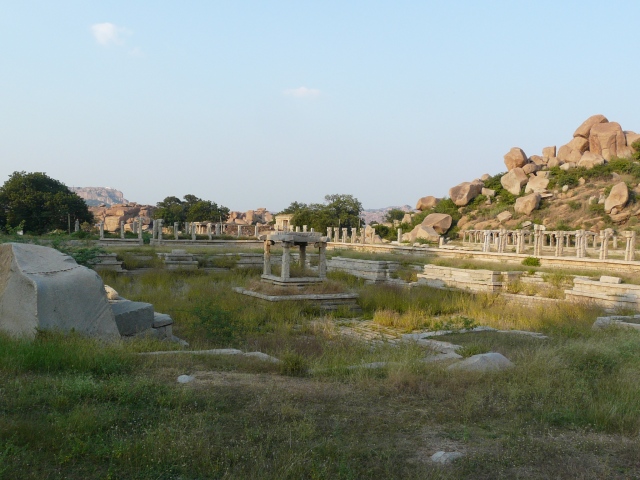 Shrine in the bazaar

Looking back towards the temple

Shrines and temples at the northern terminus of the bazaar street, near the river and Chakra Tirth 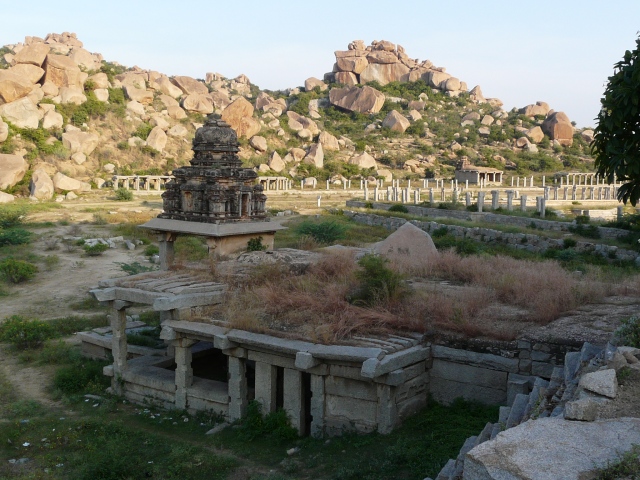 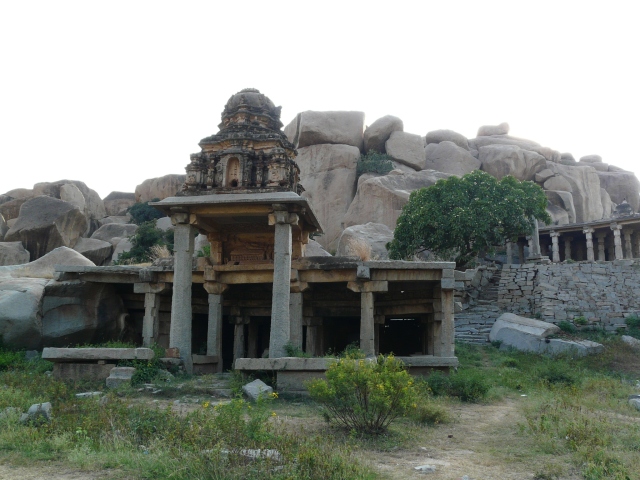 At the northern end of the street is a ruined Shiva temple that is known as Varaha Temple, because on its gateway is this bas-relief of a boar (varaha) and sword, which is an emblem of the Vijaynagar Empire. 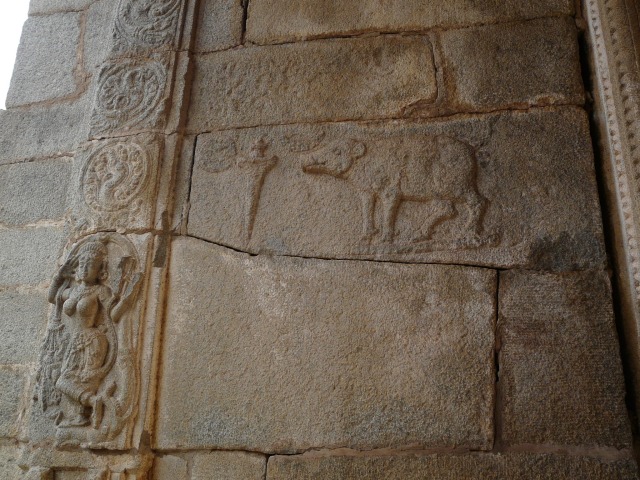