Many Dilliwalas are familiar with the portion of the fortifications of Qila Rai Pithora (which date back to the 12th c. AD) that are visible along Press Enclave Road along the Qutb Golf Course boundary. There was also a portion of the wall that stuck out onto Aurobindo Marg just north of Lado Sarai that was under litigation for many years and which was finally (sometime in the 1990s I think) torn down to widen Aurobindo Marg. And then there are the Lal Kot fortification ruins north of Mahrauli in the Sanjay Van area that I had covered in my Mehrauli post.

I was pleasantly surprised to find that there are other parts of the walls that have been excavated and exposed (and no doubt restored to quite an extent) in years/decades past. One of the two best places to explore these walls is at “Qila Rai Pithora Park” on Press Enclave Road. The park is located at the eastern end of the fortifications along the road, very close to the Malviya Nagar metro station. At this location, the fortifications turn southwards and go on for a little distance between the golf course and Saket colonies. At the park, apart from being able to walk along quite a length of the Qila Rai Pithora walls, there is also a very decent permanent exhibit about archeological works in Delhi and India in general, housed in a circular building. Unfortunately this exhibit falls into the common Indian trap of failing to clearly differentiate between Hindu myth and ancient Indian history (and seamlessly moving from one to the other), but that is an issue which one learns to cope with when studying Indian history.

The most interesting aspect of the park however is the presence of a small section of fortifications said to be of Jahanpanah, the large walled city built by Muhammad bin Tughlaq in the early 14th c. This is probably the only extant part of Jahanpanas’s fortifications other than the Satpula waterworks (which were also part of the fortification system). Neither the Qila Rai Pithora walls nor the Jahanpanah walls are anything very interesting to look at, but historically they are very significant, especially the small remaining part of Jahanpanah’s walls.

South of the Mehrauli-Badarpur road lies hidden another long stretch of the Qila Rai Pithora walls. Again visually these fortifications do not hold that much interest, but as a walk along some of Delhi’s oldest fortifications (originally – they must have been restored multiple times over the ages) it is quite thrilling. There is an access point to the walls a short walk from the Saket metro station (at the beginning of the road that leads to the “Garden of Five Senses”). The small landscaped strip along the walls is well maintained at the beginning, but as one moves further southwards the scene becomes more desolate and overgrown. Overall, one gets an idea of how vast and imposing the qila would have been – precursor to the great walls of Tughlaqabad!

The small stretch of Jahanpanah’s walls is on the left below. Unlike QRP, this stretch contains no bastions 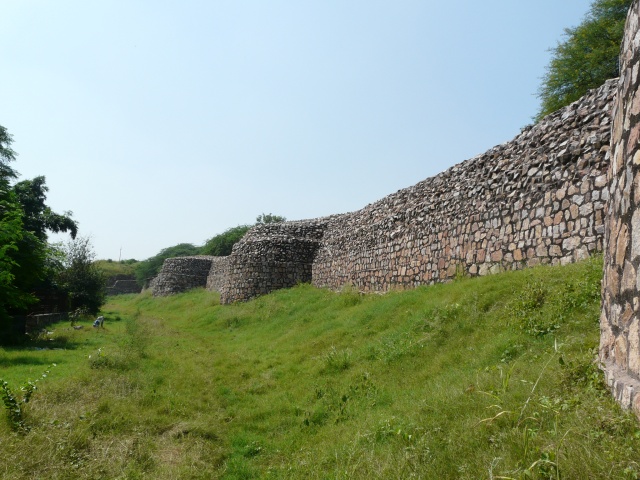 At the southern end of the walk, this large bastion indicates the last restored portion of the wall, the ruins of which can be seen continuing westwards towards Lal Kot/Mehrauli

Junction/gate structures (?) at the northern end of this wall section, just south of the Mehrauli-Badarpur road 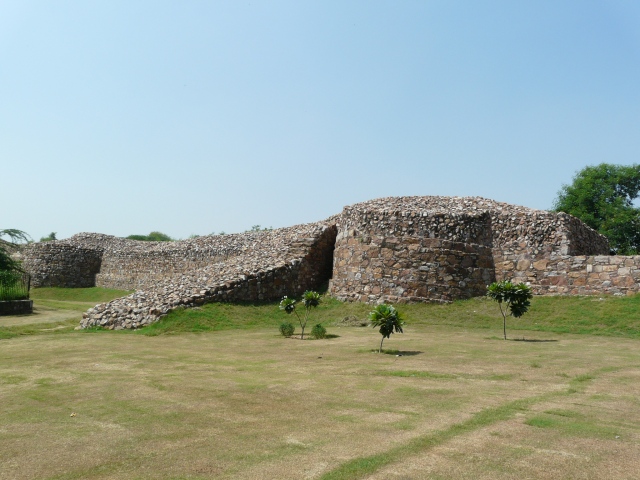 The thickness of the fortifications can be seen here